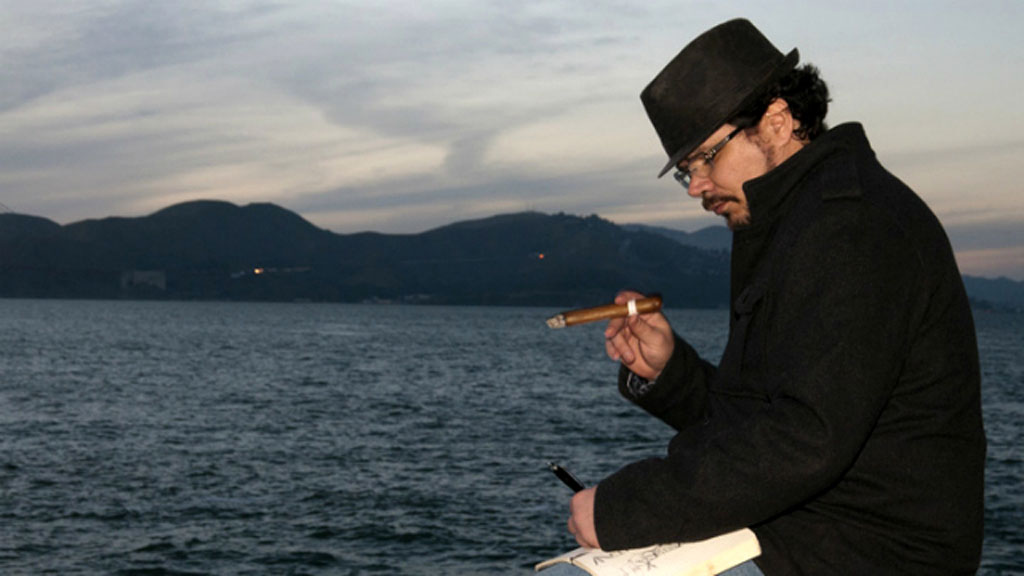 I usually try to wake at 7:00am, quickly stumbling into the kitchen to pour a glass of water. Next I do my best to get some natural light in the room, a task that’s not always so easy in the dead of Wisconsin winter, but I’m just looking for as much vitamin D as I can manage.

I unroll a yoga mat and blearily run through a routine I learned from Tara Stiles’ YouTube channel – I think it’s the “superhero” routine, but it’s not anything too intense. It does include some twists and balance poses (Warrior 3 and Tree), which are challenging enough to wake me up mentally as well as get the blood pumping.

Then I turn on my coffee maker (which my lovely partner has been kind enough to prep for me before heading off to work a few hours before) and sit, soto-zen style, for fifteen minutes. If I’m feeling rushed for time, I sit for twenty minutes instead (yeah, I know, but it’s part of the “trying to be unhurried” discipline).

After the fifteen minutes, I sit with my journal (a leather-bound lined acid free book) and write with a nice heavy fountain pen while I have my coffee. It’s two pages a day, usually, just a stream-of-consciousness. Part of it is for my own brain, part of it is my awareness that I have kids and grandkids who might enjoy reading my thoughts as much as I enjoy reading my ancestors. It’s also a pleasurable experience to have the ink flowing over the paper, to have that quiet in the morning (occasionally broken by music, but not usually).

Finally I’ll fix myself a light breakfast – usually some fresh fruit and toast – and either read my newsfeed or watch a TED talk while I eat. Once breakfast is done, I’ll get dressed (or not, since I work at home) and begin focusing on the actual tasks of the day.

“Stuck with” is perhaps stretching it. I prefer it, but I manage it perhaps 70-80% of the time.

When I’m traveling – which I do a lot – I tend to have a problem keeping to my routine. Some of that is self-consciousness (I’m usually traveling with others) and some is just not having the privacy/accessibility for that kind of practice. Still trying to work that out…

It has slowly developed over the last few years as I tried out various different lifehacks and did research for my blog.

For example, it used to be sitting first thing in the morning, in the dark – but reading up on the body’s need for hydration and the effect of natural light on our neurochemistry added in those steps. The coffee/journaling is a simple exercise in classical conditioning: if I don’t get coffee unless I journal, I tend to journal more.

Later than I should. Usually midnight. I tend to resent having to go to bed, because there’s always so much I want to do.

I wake up when my partner does, and she hits the snooze, but then I go back to sleep for a bit when she leaves for work. I have an alarm set for 7:00am, but usually I wake up a few minutes before, and that usually lets me know my body thinks it’s had enough sleep.

I hate snooze buttons. One leftover from being in the military is that when my alarm goes off, my brain wants to start working. Laying there pretending to sleep is like having my engine revving without ever putting it in gear.

Usually breakfast happens about 45 minutes to an hour after waking up.

The most recent tweak to the routine is the fruit/toast breakfast, which was provided to me during a retreat near San Francisco. Given that I’m in Wisconsin, oatmeal is also a very nice warm and healthy meal. Every once in a while, when my partner doesn’t have to be at work at OMG-It’s-Early, she and I will have a “big breakfast” of pancakes, eggs, bacon, juice, the works.

I actually really hate yoga, but I’m at an age where that’s what my body needs. Trying out programs like Dirty Yoga helped me work out a mostly-happy medium between “I’m bored” and “I’m feeling good.”

I will occasionally mix up the yoga routines, and I’d like to get back to doing T’ai Chi, but I don’t do any strenuous exercise in the morning; it’s all about the stretching.

How about morning meditation?

Soto zen meditation, as I understand it and practice it, is basically just sitting there. No chanting, no visualizations or affirmations, just SIT THERE. Of course, the brain goes to various places – the “monkey mind” likes to play – but the idea is to just continually bring it back to here. Now.

I’ve taken to really enjoying that brief part of the day where my job is to just sit quietly. I think of it as gathering silence, of collecting a reservoir of peace that I can draw on as needed during the turmoil of the day.

Do you see to email first thing in the morning or leave it until later in the day?

I try to leave it to when my “official” day starts.

Mailbox is the app I use, which has a gesture-based interface that makes sorting through email a visceral joy. But I try not to let the world into my brain until my routine is done. That being said, I have some work that can be urgent, and some clients have “alerts” on my phone so that they can get my attention when needed.

How soon do you check your phone in the morning, either for calls/messages or social media and news?

However, I don’t always manage that discipline. If it’s a lazy morning with my partner, she and I will cuddle and check our phones while sharing funny GIFs and such. It’s a different kind of morning routine.

I manage a few sites, so there’s making sure that they’re up and running smoothly, and I take care of any support issues if there’s an emergency.

But for the most part, as a self-employed freelance content creator/manager/digital ronin, the most important task is to “sharpen the saw” – get myself in a state of mind where I can handle whatever task and seize whatever opportunity is about to come my way.

That’s my Achilles heel. It’s not so much a matter of being unable as being somehow embarrassed by it – funny, since I am sharing it with all of you. But somehow I have trouble insisting on carving out my own time and space for this when traveling.

Sometimes it’s just because I tend to stay out later when traveling, but that’s a justification of the reality that I just don’t seem to do it. That’s ok; I’m a work in progress, and when I do make it, it doesn’t take much room – just enough to spread out the yoga mat, really.

What do you do if you fail to follow your routine, and how does this influence the rest of your day?

When I manage this routine it really does feel like being “sharp” – though I’ve found that probably the most important part of the whole routine is to GET ENOUGH SLEEP. When I don’t follow it, there is less organization and energy to the day.

I’ve tried doing the various things later in the day, and they don’t hurt – but it’s not the same as starting out with this hour of self-maintenance before heading into the world. Lately I’ve found that when I don’t follow it I miss it, and actually look forward to getting back into it.

Our recommended kitchen utensil this week is the NutriBullet Blender. We only recommend three things a week that we believe will be of interest to our readers. Please take a moment to check it out.