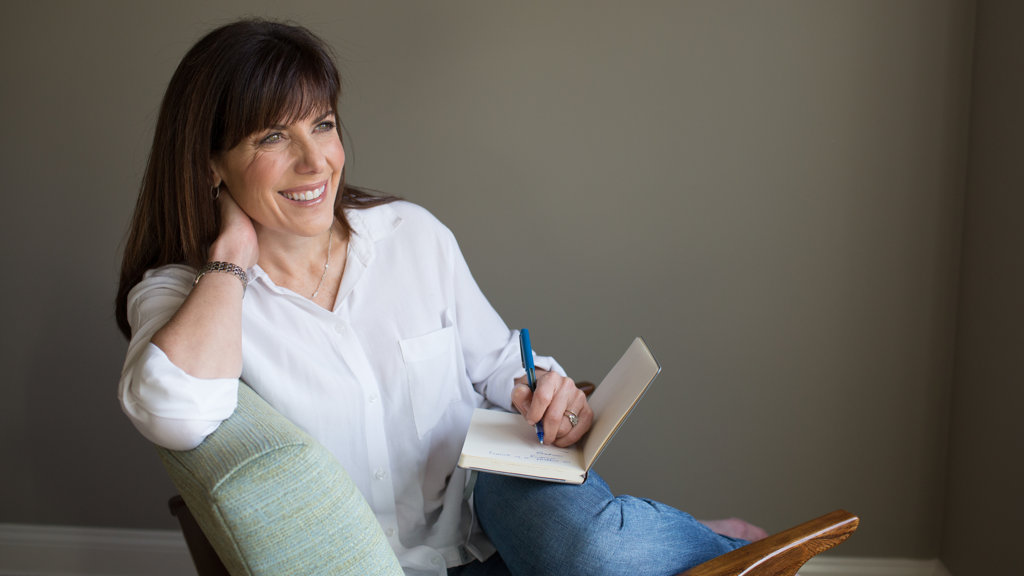 I get up between 5:00-7:00am, depending upon whether I’m working early on television or have a deadline. When I have a deadline, I find that the early-morning hours (before emails start to roll in) are my most effective writing hours.

When I’m in the process of writing a book, the 5:00am wake-up time can go on for months. It’s something I learned from my mother, who received her master’s degree in educational psychology when my brothers and I were in grade and middle school. She would get her work done before anyone in the house was awake. So, I get up. I let the dog out, make the coffee, let the dog back in, feed him, and then sit down at my computer and type. After two hours, I try to exercise, which usually means heading out for a run or hopping on my Peloton.

Years. Decades, in fact. I wrote my second book this way while pregnant with my daughter (now twenty-one), and while my son (twenty-four) was a toddler.

For twenty-four days and counting I’ve been trying to meditate first thing. I put the Headspace app on my phone. I started with five minutes and increased pretty quickly to ten. I recently watched the tutorial that asked, “Am I doing it right?” Quite frankly, I’m not sure. But I don’t think I’m doing it wrong, either.

It depends on what time I wake up. When I’m getting up consistently at 5:00am, I have trouble making it until 10:00pm.

Do you do anything before going to bed to make your morning easier?

I typically don’t, but my husband often sets up the coffee so it’s ready to go and all I have to do is push a button.

Always. I use the alarm on my iPhone, but I never snooze.

I don’t usually eat anything until after I’ve exercised, though I have two cups of coffee before. Lately, breakfast has been some high-fiber crackers made more palatable with peanut butter (Jif, creamy) and American Spoon Sour Cherry Spoon Fruit. I order it and a few other flavors, ten jars at a time.

Yes. I try to put on my exercise clothes first thing, and I don’t get out of them until I’ve exercised. (If I’m traveling for work, I may even sleep in them to make things easier in the morning.) On the occasional day when conference calls back up, I may not take off those clothes and shower until after noon. But mostly, I go for an early run with my friend, Diane, who I’ve been running with for years.

I live near the Rockefeller Preserve in Westchester County, New York, which has miles and miles of running trails. I credit those trails with the fact that I’ve been running since high school and my knees are still in good shape.

Do you answer email first thing in the morning or leave it until later in the day?

I do it somewhere in the middle. My inbox helpfully separates the urgent from the junk, and my colleagues and I use Slack. I don’t typically do any of it before my early-morning writing window ends, but afterwards I deal with things that need dealing with.

Do you use any apps or products to enhance your sleep or morning routine?

Not when going to sleep at night. But I listen to a lot of audiobooks and podcasts and find that when I’m trying to nap, which I’m not particularly good at, I have an easier time falling asleep if there’s a book playing in my ears.

How soon do you check your phone in the morning?

It’s my alarm clock, so if I’ve gotten any silent alerts during the night, I see them first thing. I keep my phone on my nightstand but upside down, so that I don’t see any alerts flashing at me in the middle of the night. The most important people in my life know the number of my landline. If they need me, they can get me.

It really depends on the day. As a print journalist for years, I operated from deadline to deadline. I still pretty much run my life that way. But I also make sure to think about dinner. I like to cook, and we eat at home much more than we eat out. Often that entails taking a protein out of the freezer so that it’ll be defrosted and ready around 6:30pm when I start cooking. I used to frequently start dinner in the crockpot in the morning (particularly during the winter), but now I have an Instant Pot and both Melissa Clark Instant Pot cookbooks. Even when I want to braise, I can do it in under an hour.

Coffee fifteen minutes after I wake up. Coffee again an hour later. Sometimes a third cup, reheated, later in the morning. My husband and I make half-caf because too much of the full-strength stuff makes me shaky.

How does your partner fit into your morning routine?

My husband typically sleeps a little later than I do, and he exercises later in the day. He gives me the space I need. I hope I do the same for him.

Do you also follow this routine on weekends, or do you change some steps?

Because I get up so early, I have trouble sleeping in on weekends. Also, my dog (who is used to my getting up early) will lick my face if I’m not roused when he’s ready to go out.

Yes. I travel a decent amount, so I’m pretty good at it. I strategize so that I know where the coffee is going to come from (because coffee has to come before exercise), and I make sure I’m staying in a hotel with a decent gym or a running trail nearby. When I’m on the West Coast and operating three hours earlier, unless I’m there for three or more days, I don’t reset my watch—I just rise and go to sleep on East Coast time.

What do you do if you fail to follow your morning routine, and how does this influence the rest of your day?

Not exercising in the morning is the thing that messes me up the most. Before I started meditating, my attitude was that exercise was my meditation. Now I’m trying to do both. If I don’t sweat a little bit and shake out my limbs, I’m not as productive—or happy—for the rest of the day.

Our recommended kitchen utensil this week is the NutriBullet Blender. We only recommend three things a week that we believe will be of interest to our readers. Please take a moment to check it out.