Note: This is an entirely unbiased review. We have no association with the owners/team behind the app.

I’ve been using the Sleep Cycle iPhone app since January 2011, though stopped using it briefly for a couple of months during the summer of 2012 (and don’t use it when travelling). Still, that’s not a bad data set.

Sleep Cycle works by using the accelerometer inside your iPhone (the part that knows when you turn it sideways) to detect your movements as you sleep. It’ll then use this data to wake you at the optimal time in your ‘wake up phase’ which you can set to be between 90 and 10 minutes long.

For example, if your opt for a 20 minute wake up phase and set your alarm for 8:00am, if Sleep Cycle feels strong movement as you turn at 7:52am (indicating you’re experiencing light sleep), it’ll wake you then, resulting in you feeling significantly better than if you’d been woken at 8:00am in the middle of a deep sleep.

Seriously, I love this thing so much I can’t imagine using any other alarm to wake me up ever again. To say it’s changed my life may be pushing it a little, but it’s certainly had a large hand in improving my sleep, as you’ll see below.

Each night after you place your iPhone beside your pillow the app will collect your movements through the night, plotting them onto a graph intended to give you a fairly accurate representation of how well you slept, which it’ll present to you upon you waking. Below on the left is a screenshot of a very good night’s sleep I had recently, followed by a fairly bad night’s sleep I had last year (all images in this post enlarge): 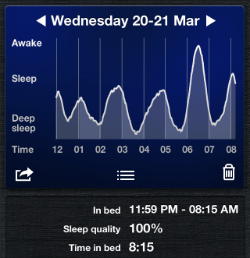 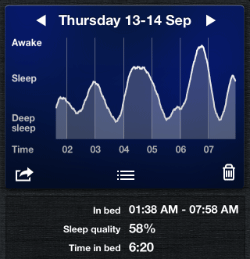 The graph on the left shows an almost perfect collection of sleep cycles, a term separate from the name of this app which represents an hour and a half period where you move from light sleep to deep sleep, and back into light sleep again. In light sleep you’ll be more susceptible to noises or movement, therefore it’s during light sleep that you may sometimes find yourself waking up in the night, as you can see I did at 6:30am.

The graph on the right shows a shorter night’s sleep (6:20, compared to 8:15) though this doesn’t in itself account for a much poorer sleep quality; 58% compared to 100%. The sleep cycles within this graph vary between and hour and two hours, and show half an hour between 4:15 and 4:45am in which I was tossing and turning in light sleep, even though I didn’t wake; all of which will have contributed to my bad night’s sleep.

On the left below you can see how my time in bed has slowly risen over two years from just under six hours a night in January 2011 to almost eight hours a night in March 2013, and on the right you can see a more detailed look at the last three months (click to enlarge): 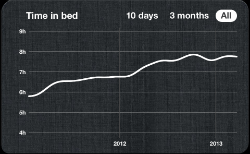 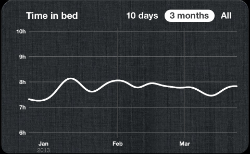 As you would hope, this rise in the time I spend in bed has in part attributed to a better quality of sleep, with the below graphs showing a rise in the average quality of my sleep of over 30% in just under two years, albeit with some downward slides: 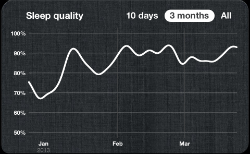 And just for fun, here are a couple of graphs showing the times I went to bed over a two year period, as well as a more detailed look at the last three months. All these landscapes graphs can be accessed in the app when you turn your iPhone landscape on any daily graph screen. 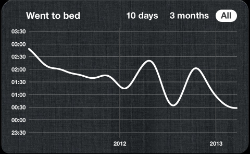 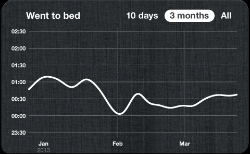 This app is nerdy as hell, but why (aside from data collection) would you choose to use the Sleep Cycle iPhone app over the standard alarm app provided by Apple, or you know, one of those alarm clock things you used to find on every bedside table across the land?

I’ll admit, I’ve yet to use any other iPhone sleep app so I can’t compare Sleep Cycle to any of its iOS based competitors, but what I can say is this app has single handedly changed my overall mood when I wake up in the morning. And though I’ve been using the app for 997 nights, even if you have no interest in the data this app can change your mood, as they say, overnight.

When I decided to write a sleep cycle app review for this site I did a quick search to see what other reviews were out there before stumbling across a few forum discussions questioning the validity of this particular sleep app.

I was pissed, but I found it hard to believe. I’d already been using the app for close to two years by this point and though the majority of my nights weren’t eventful enough for me to positively look at my sleep graph in the morning and say “yes, that’s definitely what happened” I’d had enough disturbed nights over those two years that correlated pretty well with the graph I saw as soon as I’d woken up that I knew these fake claims were likely little more that irked customers, random glitches in the software, or even negative PR from competing apps.

Still, I gave the rumours a chance. The claims causing some people to call the app fake were centred around the fact that they had set the app up before bed, then left their iPhone out on a table or on the floor, and the next morning they had been presented with a sleep graph as if their phone has been beside their pillow all along.

I don’t know whether these specific claims are true, but I can say when I tried this for myself to test it out, once on the floor of the spare room in my parents house, and once (three months later) on my desk in my apartment, very little movement was detected.

In fact, on the carpeted floor of my parents house no graph was created at all, all I got was a flat line. When my iPhone was placed overnight on a wooden desk on the wood floor of my apartment, it registered slight movement before I fell asleep, and a similar amount later on before I woke. In the screenshots below I remember waking at around 7:00am, and then being half-awake before the alarm went off, which could go to back up points made against the fake rumours saying if the app struggles to detect movement it will assume you’re on a harder mattress than usual (or you know, a table) and significantly heighten the sensitivity of the accelerometer so to help ensure as accurate a graph is created as possible: 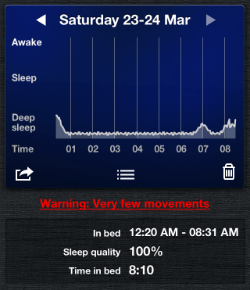 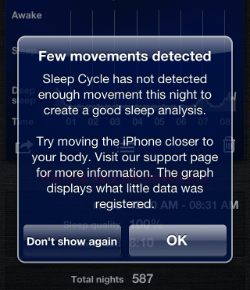 With that said, after 997 nights of usage, I absolutely do not believe these rumours. The data speaks for itself.

If you came to this page via Google looking for a Sleep Cycle app review, chances are you’ll enjoy the weekly morning routines we publish here. Head on over to our routines page to check some out and keep the positive momentum going.